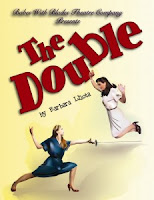 The opening volley in Babes with Blades' 2011-2012 season, The Double, should firmly establish in anyone's mind that this troupe is one of the more talented community ensembles that Chicago has to offer.

Even though seen in preview, the script was tight, the acting was first-class, and the "violence" was predictably top-shelf. There were, of course, the usual number of minor preview glitches, but these did nothing to detract from the show and, in fact, demonstrated the strength of the production in the way they were quickly left behind.

The script, the company's first foray into comedy, was crafted by Barbara Lhota, and reflects an endearment for the company, the period (1930s), and the genre. The comedy is broad but not slapstick, and clearly the actors are enjoying themselves as the plot unfolds and the mayhem begins.

Particularly strong in their parts were Lisa Herceg as Rosalind Rollins and Gillian Humiston as Minnie Sparks, but it should be said that there isn't a wooden nickel in the batch. And the direction by Leigh Barrett is crisp and clear - with so many story lines and actors to manage, she made the unfolding seem effortless.

Of course, what would a BwB production be without great stage violence, realized by Libby Beyreis? The Double builds nicely to a crescendo of swashbuckling derring-do that is simultaneously thrilling and comical. Given the imaginative multiplication of combatants and the swishing of blades across the entire stage, it was a treat to observe such skill and choreography from the front row.

What could be improved? Minor points, mostly: a few linguistic anachronisms creep in (being "freaked out" or "disrespected"), and there were a few times when the audience wasn't certain whether the time to applaud had come. Also, the first 15 minutes or so seemed a little muddier in exposition than they ideally might have been, but it wasn't long after that the roles and characters were sufficiently clear.

The long and the short of it, bub, is to find your way to this production at the Lincoln Square Theatre before it closes in late September!